It’s easy to be lulled into a false sense of security with social media.

We’ve lured a world famous actor to come and be our ‘face’ and recreate the look of Pulp Fiction’s Winston Wolfe.

We’ve produced a great series of TV ads with our new character ‘Mr Wolf’. They are genuinely different ads for the space in which Direct Line operate.

And then they throw it to the real wolves by using sponsored posts all over Facebook and their existing customers get hold of it. 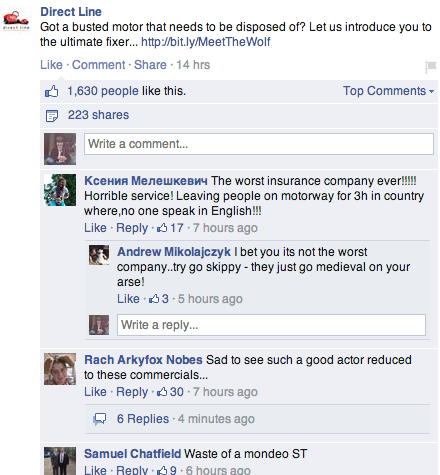 There are have been 224 comments in the first 14 hours and as far as I can see, every single one of them retells a story of how they have been badly treated by Direct Line or commenting on Harvey Keitel’s decision to work in the insurance market.

For me, this can be nothing but bad for the Direct Line brand. Assuming most people have 250 friends on Facebook, these negative comments have already been seen by at least 50,000 people with a negative endorsement. If you add the 223 shares, this problem could be much worse than it first looks.

Compare this to the number of views on YouTube (only 3,573 after eight days) and you can see that the negative power has been at least FIFTEEN times more effective at reaching people. It may have gone viral, but hardly the type of viral they were hoping for.

Social media is both friend and foe. If you open yourself up to comments and feedback on such a public platform you need to be 100% sure you can cope with the responses. The old adage of ‘never asking a question you don’t already know the answer to’ may have been a prudent way of thinking before they ran this campaign.

I suspect a few people in the team at Saatchi (who produced the campaign) will be getting an ear bashing for their decision to try and amplify the positive effect of their advertising spend by engaging with Facebook and REAL customers.

When you set out to create a brand you can design in certain criteria. By pricing it high, you exclude certain buying groups, by not even making XL sizes for women, you naturally exclude the larger ladies. They also place ‘beautiful people’ in a state of undress outside their stores as greeters. These decisions form the basis of the whole brand and who you target and appeal to. I am far to old/fat to be in their target audience (but so is their own MD!) and I am now quite proud to say I have never owned any of their products.

But Abercrombie and Fitch have taken this brand separation to a new level by destroying all damaged or returned goods rather than giving them to the homeless, as many other brands do. All very deliberate and all very elitist. the assumption being that seeing homeless people in A&F would embarrass their own beautiful customers.

But here comes the brand backlash. 7.5 million views in less than a month, and growing fast. Watch this space. It may be the next Gerald Ratner moment for the A&F brand.

You may well have seen this ad already. My children dragged me onto YouTube to see it, they liked it so much. I do to.

A few things strike me about it.

1. The branding is almost too subtle. The first shots of him holding the milk carton display no branding whatsoever, other than the green stripe around it.

2. It is properly joined up in it’s social media. The Twitter account is well worth a look and it is written (or tweeted) beautifully in character of a slightly sinister cat Bertrum Thumbcat.

3. It is very cleverly built with embedded links into the video. This means that it must be a paid for placement as YouTube don’t allow for link embeds as we have discovered with my son’s social media experimenting.

4. It is ripe for running. By this, I mean that this will be the first of a series of ads to follow in the same storyline, like the Meerkat ones. I’m quite looking  forward to seeing the Thumb Cats slowly taking over the world.

Tipp-Ex don’t exactly strike me as an innovative brand. Quite the opposite in fact.

But this is really clever. Watch the first bit of the video and then make your decision.

Between us in the studio, we tried eating, tickling and sha**ing the bear and all produced relevant results. Whether it says much about the Tippe-Ex brand itself is a different question, but it does pitch them in an innovative light. Maybe it will make people look again at what they are doing. It’s had 10 million people looking at it already!

Thanks to my mate Rob Marshall at RM Create for sharing this with me. You can see his tweets at @ThrobMarshall.

The old ways of working are changing forever. I’m reading Seth Godin’s Purple Cow at the moment, which I know I should have read already, but I never quite got around to it before now. Sorry.

The long and short of the book seems to be that ‘if you always do what you’ve always done, you’ll no longer get what you always got’.

We don’t respond to print advertising anymore. We interact with each other online and we often come into contact with brands online. We don’t just want products that work, we want brands that make us feel good about ourselves, help us bed into our particular tribe we have identified we want to be part of and speak to us in a relevant voice.

All this, and at the same time, listening to what we have to say, because we the customer owns a brand these days, not the company who may own the production.

This short video sums it up beautifully. You have two minutes to change the way your brand behaves. Use them wisely. 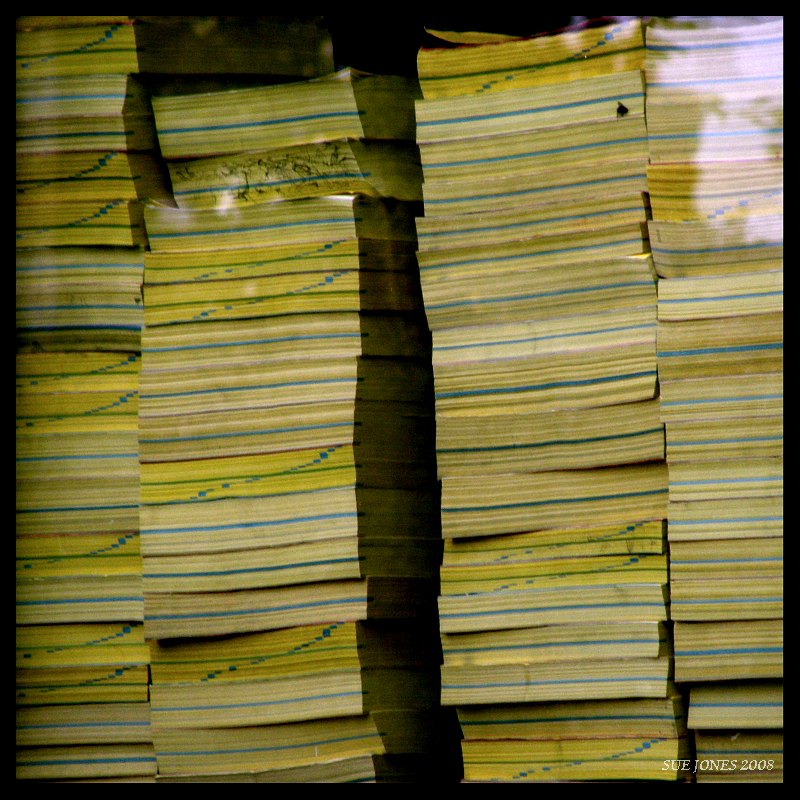 Yellow pages used to be one of those businesses that you relied upon to provide calls that lead to sales. They were at the top of their game, the top of their market and charged accordingly. We had many of our clients paying £600 plus for a tiny quarter column and in a single section. They were unionised so we had to provide flat artwork, with an NGA stamp on the back of it far later than anyone else in the industry.

It was worth the hassle though because it worked.

But now I’m sure that it doesn’t.

Yellow Pages started in 1966 as a supplement to the Brighton telephone book and spiralled upwards from there. In 2008, they produced 104 different regional copies and distributed them free to 28.4 million UK homes.

My new 2010 copy arrived on Thursday last week and was left on my doorstep. I looked at it for a day or so and then emptied into the recycling bin without even unwrapping it. I’m not alone. Every single person I have asked has done the same, so the advertisers money is literally being thrown away.

And that’s because the brand hasn’t evolved anywhere near fast enough to remain relevant. It’s currently swamped under a debt of £3.8bn and had an underlying loss of over £1bn last year. So why is it still insisting we need these doorstop directories and why are advertisers still paying to be unseen?

I can only conclude that if they are losing that much money, they are either paying too much to print them, too much to distribute them or their advertising revenue has fallen to a level a long way below breakeven. So they need to implement a massive and structural change to remain relevant to an audience that is behaving very differently to those that were around in 1966.

In 1993 they ran one of the most famous TV commercials ever, but surely poor Mr Hartley could now just buy it on Ebay or a specialist book finding site online.

192.com are running an e-petition (which is a thinly disguised advertising campaign) to get you to sign up to say ‘no’ to printed directories. In these environmentally conscious days, they have a point and I for one can’t remember an occasion when I turned to the Yellow pages for the search I needed.

The figures from Google show that 87% of all online activity begins with a search and they handle over 7 billion searches in any given month. According to Wikipedia, who reference Nielsen and other independent studies, they have a very slim percentage of Internet searches.

And their online version Yell, is a bit rubbish. It’s no better than any other internet search as it doesn’t come with a recommendation like Facebook and even Twitter can provide and it doesn’t allow you to feed back as to what you thought of the suppliers using something like Feefo so we can begin to trust those who advertise and tell the cowboy from the craftsman.

It’s very easy for me to have a pop at someone like Yell when they are down and on their way out, but for them to not evolve, is signing their own death warrant. There’s a slightly different logo on the Yell site (whoopee) but it is in effect, exactly the same product as when they launched it to the market – before Google were any form of force – in 1996.

There is such a strong theme emerging in my thoughts that any business now will have to be different in a few years time, that it worries me how many more of these classic institutions are going to go the same way.

Woolworths did, Waterford Wedgwood did and Yellow Pages probably will, so who’s next?

Evolve or die, because this generation isn’t like previous generations and the next one will be different again.

Thanks to Sue Tortoise for her Yellow Pages image. You can see more of her lovely natural work here. She seems to work more in the field of nature and all things flora and fauna, so it was a surprise to find this image amongst her collection. Anyway, thanks Sue.

Some of you may have seen this before, but I had to remove it because it had the wrong music on it and I was in danger of breaching someone else’s copyright.

Have a look and see what you think.

If you want to take your kids there, it is officially the best Children’s adventure park in the world!